In the tradition of last year, I decide run a report of what I have done as a year in exercise. I did a lot more than 2018. I am going to say this, it is not bad for a middle aged desk jockey.

I did not include other activites that I tracked such as body weight exercises, sailing, or swing dancing.

I am going to start including weight for accountablility. Lets say that 2019 was not a banner year.

Carl Sandburg is one of my favorite poets from my early University life. I been running across his poems again. That poet speaks to me. My position was aways that the Ocean demands respect. If you don't give it respect that the it demands, it will punish you without mercy.

"The sea speaks a language polite people never repeat. It is a colossal scavenger slang and has no respect."

Will write more later, just wanted to put up these pictures.

Escape sailed the 2019 SBYC Holiday Regatta. It was a two day event.

Sunday was interesting (Day 2). Heavy wind. We actually got up to 12.8 knotes on one run. We also had an encredible broach. I was thankful that no one was in the water.

A fellow captain told me this rule: If there are whitecaps, PFDs go on. On that day, it was word to the wise.

Been a long time since I broached Escape. This was intense.

A small warning, some salty language.

A fun day on the ocean. We had wind gusts around 18 with average winds of 15vmph plus it was COLD. The wind direction was unusual. We still had an angle to fly the kite.

Our club handicap for the day was still bad. CHRF racing is like golfing handicaps. It changes from race to race.

I am not a young thing. I could not do this when I was in best of shape. In 2016 when I decided that I was fat, and I was going to lose weight to be healthy walking a few miles a day was an accomplishment.

I have some fanticy accomplishements that I wan to do: 5K, 10K, half marathon, Triautholon. You know what? They do not seem too inimidating like they did in 2016. I just need to sign up and participate.

It is funny to me, but the badges on strava do have meaning. You do not get them for showing up, they are earned by doing.

Twitter has been a good source of information in realtime outside the pornbots and climate change virtue signalers (time and place appropriateness).

Yesterday around 4:30pm, I got this text:

Fire dept enroute for Fire in the Highway 154 area on the Santa Barbara Side.

When I got out of work I took this picture from SBCC East Campus around 5pm November 25. 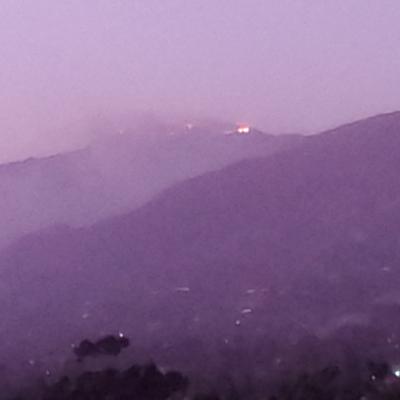 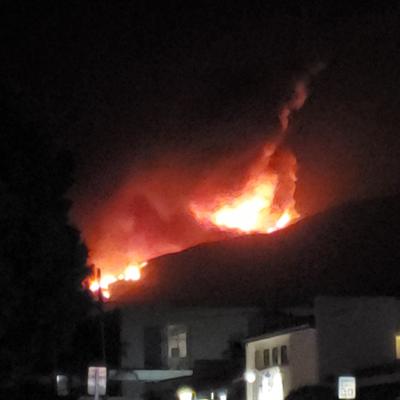 I have a friend who lives in the area. I am glad she is more prepared than I am and high tailed it. Her house is not in danger, but Santa Barbara is really just one bad wind change away from being burned down.

The air was clean this morning, but I can smell the fire now. Time to find the N95 masks that I bought from the last fire.

Now for the editorial. We have a good airport. However, fire fighting aircraft is located in Santa Maria and Los Angeles. I am thankfult to Los Angeles for sharing their resources last night. Fires like this get out of hand because of lack of quick response. Santa Barbara USED to have fire fighting aircraft. There is a part of me that believes that we would have such aircraft if it were important to our representatives.

A note: I think growing up in in Santa Barbara, I am remeber, how fast response was. Even with resources close, fires could get out of hand. This fire went from a few acres to over 3,000 in hours. Our fire department was on top of it. A single helecopter around three hours later. Major air assets around 16 hours later. It was scarry last night because there was gale warnings (34 to 47 knots) and wind direction could have swepted the fire through town.

I am going to say this, I am appreciative of the effort to get the fire under control. It is first rate.

Resources involved in responding to the #cavefire include:
600 firefighters
5 bulldozers
9 helicopters
10 fixed wing aircraft, and more
Thank you to all first responders and to all the crews in the region who responded to assist #SantaBarbaraCounty

Just read A New Treatment for Alzheimer's? It Starts With Lifestyle by Linda Marsa.

I feel that we should all read it. Partially so that we can better take care of our love ones and take better care of our selves. I don't know if it is correct or not, however, to me it makes a lot of sense.

Summary protocal to combat the problem:

This is just a short summary. I hope you read the full article. I plan to add more to this post, just that right now I other responcibilites are calling. I hope to update later.